The next generation Transcranial Doppler (TCD) system that will exceed everything you know and expect from a TCD system.

The IMUSA DOLPHIN IQ PRO supports numerous standard and new unique features for the benefit of the medical staff and patients alike: 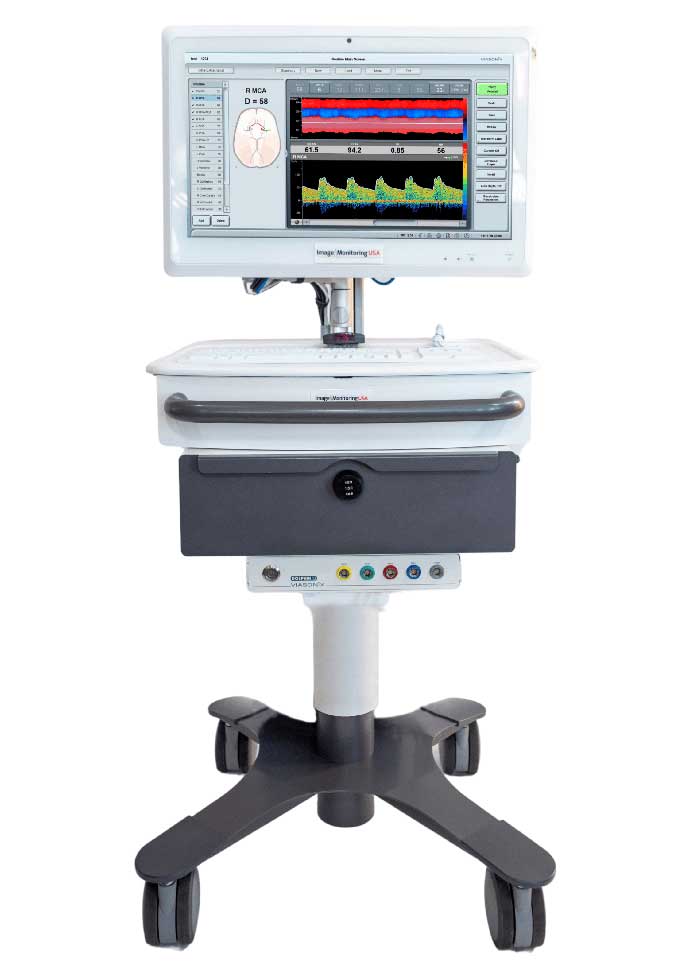 The IMUSA DOLPHIN 4D supports numerous standard and new unique features for the benefit of the medical staff and patients alike:

Imagine what you would like to have in your ideal TCD system, and discover it in the DOLPHIN!

Cerebral Vasospasm is typically the outcome of Subarachnoid Hemorrhage (SAH) as a result of an aneurysm rupture. Early detection of vasospasm is critical since it allows timely intervention.

TCD is rather specific for this condition, and allows non-invasive, continuous bed-side monitoring.  Vasospasm is characterized by increased velocities due to arterial narrowing. Severe vasospasm is defined in various international guidelines, and typically when mean velocities exceed 200 cm/sec, moderate conditions are with mean velocities between 120-200 cm/sec, and mild vasospasm is for mean velocities near 120 cm/sec. Additionally, velocities in the middle cerebral artery can be compared to internal carotid artery velocities, and the resulting ratio (Lindergaard index) can indicate cerebral vasospasm when it is greater than 3.

Typically, vasospasm is a developing pathology, and requires day by day monitoring of blood flow velocity values.  The IMUSA Dolphin system provides a dedicated vasospasm protocol that allows setting velocity thresholds for immediate identification of the severity of the vasospasm condition.  In addition, an immediate day by day velocity trend analysis is provided in order to help identify the critical time whereby intracranial velocities are dramatically increased, and immediate clinical intervention is required.

The Dolphin also provides an ideal platform for the identification of the critical highest intracranial velocities.  All data is saved both in the time domain and at all depths along the ultrasound beam, which allows the examiner to review the data after freeze to explore the measured blood flow velocities.

Arteriovenous Malformation (AVM) relates to a condition whereby the arterial flow bypasses the capillary circulation and connects directly to the venous drainage, thus not allowing for appropriate tissue perfusion.

This condition is characterized by low resistance to blood flow, resulting in high volume flow rates. AVM is therefore characterized by high mean velocities – although lower then with severe vasospasm – which are coupled with a low pulsatility index (PI).

The IMUSA Dolphin multi-depth options allows to simultaneously view and measure the blood flow spectrum at different depths along the beam and quickly identify deviations from expected waveform patterns.

Intracranial pressure (ICP) is the pressure inside the skull and thus in the brain tissue and cerebrospinal fluid. Elevated ICP has a direct effect on the cerebral blood flow velocity and its’ pulsatility, which can be detected with simple transcranial Doppler (TCD) measurements.

Intracranial stenosis relates to a focal narrowing of the artery, either as a result of an atherosclerotic lesion or as a result of external compression due to a tumor.
TCD will easily identify a l

ocal increase in blood flow velocities, characterized by the fact that proximal or distal to the stenosis the velocities will be much lower that at the site of lesion itself. Peak focal v

elocities above 150 cm/sec can indicate an arterial stenosis. However, if the severity of the stenosis is beyond its’ critical level, velocity signals may be diminished.

The IMUSA Dolphin ideally allows multi-depth scanning along the ultrasound beam, and display in both the m-mode and spectral domains. This allows for simultaneous analysis and evaluation of pre- and post-stenotic flows as well as in the focal region of the stenosis itself.

Vasomotor reactivity (VMR) and autoregulation define the physiological compensatory mechanisms when flow is impaired. Identification of exhausted VMR can be a good indication for high risk for stroke. VMR can be assessed with TCD under two specific conditions: hypercapnia or CO2 reactivity, and with intravenous injections of Acetazolamide or the Diamox test. Note that the Diamox test is not accepted in some countries.

The IMUSA Dolphin is ideally set with dedicated Unilateral and Bilateral protocols to determine the autoregulatory capacity of the cerebral circulation of the patient. Doppler waveforms are captured automatically during baseline, and peak (hypercapnia) and minimal (hypocapnia) flows for immediate evaluation, as well as a display of the blood flow fluctuations during entire test process. The respective parameters are automatically shown in a dedicated table with the VMR index readily displayed.

The Breath Holding (BH) test is a specific test for evaluation of Vasomotor Reactivity (VMR) and cerebral autoregulatory capacity.

Identification of exhausted VMR can be a good indication for high risk for stroke. Breath holding induces and increase in CO2, which in turn results in cerebral vasodilation. An increase in peak velocities during breath holding indicates different levels of patent autoregulatory capacity, While the absence of flow increase during the BH test indicates diminished physiological vasodilatory capacity and potentially high risk for stroke.

The IMUSA Dolphin is ideal for BH test with a dedicated breath holding protocol. This protocol leads the examiner with the different stages of the test, and provides automatically the breath holding index (BHI) for clinical determination.

A large timer displayed during the test helps both the patient and the examiner in keeping track of the duration of the procedure. Automatically placed markers identify the peak and minimal velocities measured during the procedure.

Cerebral monitoring can be critical for identification of neurological complications. Relative and/or sudden changes in cerebral blood flow velocities can become a powerful diagnostic tool and effect the immediate clinical intervention.

Bilateral cerebral monitoring is particularly useful during cardiac surgery for identification of embolic events, which may be the source of post-surgery neurological deficiencies.

The IMUSA Dolphin supports both unilateral and bilateral cerebral blood flow monitoring with a dedicated and easy to use monitoring headset. A variety of monitoring tools allow to view the complete duration of the monitored procedure, as well as zoom in or out on specific regions of interest. A variety of automatically inserted event markers, as well as user defined markers, help in post-monitoring analysis.

In addition, the Dolphin supports the display of data obtained from external channels for close correlation with the cerebral blood flow information.

Cerebral emboli can take the form of atherosclerotic plaques, air bubbles or blood clots. An embolus has distinct characteristics which allow to identify it when it travels within the blood stream. The risk of cerebral embolization is in immediate impaired perfusion to the tissue of the brain, which may lead to stroke and sudden death.

TCD can detect the embolic signals in the blood flow velocity waveforms, which are typically characterized with:
• High energy
• Unidirectional
• Traveling within the blood spectrum
• Short in duration
• Typical “chirping” or “bleeping” sound

High intensity transient signals (HITS) are often considered as embolic events. The IMUSA Dolphin has the most advanced HITS detection and analysis platform. Dedicated HITS Analysis screens show the specific embolic characteristics, such as its energy, velocity and duration patterns, as well as display its travel route in the time and depth domains. A special Power M Mode with an Ultra-high time resolution provides the option to zoom in on the m-mode screen at 125 micro-second resolution.

Furthermore, the Dolphin can optionally detect embolic events that are even not within the measured spectrum of the central depth, due to its powerful multi-range and multi-depth analysis capabilities.

Transcranial Doppler is very useful in the identification of patent foramen ovale (PFO). PFO is a hole between the left and right atriums of the heart. While this hole exists in everyone before birth, it most often closes shortly after birth. If the hole fails to close naturally after birth it is called PFO.

TCD can easily identify the existence of PFO by injecting micro-bubbles (air mixed saline) to the patient vein (typically the antecubital vein), while the Doppler signal is recorded during the Valsalva maneuver. If embolic events are found in the recorded cerebral blood flow, typically the middle cerebral artery (MCA), then this is an indication of the existence of PFO in the patient.

The IMUSA Dolphin is ideal for PFO examinations, with a dedicated PFO protocol. The test can be performed unilaterally or bilaterally, with automatic count of high intensity transient signals (HITS) which are considered as embolic events. Each embolic event can be further analyzed with extremely high temporal and depth resolutions, and the specifications of each event displayed in a special screen. Furthermore, the embolic travel in the depth and time domains can be viewed for additional discrimination from artifact events.

Similar to cerebral autoregulation and vasomotor reactivity, cerebral collateral flow reflects an alternative compensatory mechanism to pathological flow conditions. The cerebral collateral pathways include side-to-side via the anterior communicating artery, posterior-to anterior via the posterior communicating artery, and external-to-internal via the ophthalmic artery. TCD can detect reverse velocities in the collaterally perfused arteries, indicating the viability or absence of this compensatory mechanism.

Brain Death condition reflects an extensive and irreversible brain damage, characterized by almost no volume blood flow to the brain. Timely identification of brain death is important in cases of organ donations.

TCD can detect the different stages of brain death through analysis of the particular waveforms: a sharp systolic peak followed by near zero diastolic velocities; systolic spikes followed by retrograde diastolic velocities; short spikes; and ultimately, no signals at all. Note that there are countries in which the use of TCD for diagnosis of brain death is not accepted. For determination of brain death, the characteristic waveforms should be displayed in all intracranial vessels. In order to accept the absence of a Doppler signal in any vessel, a prior valid measurement must be identified in the same vessel to ensure that the access temporal window is fine.

The IMUSA Dolphin special m-mode option allows the examiner to view flows at all depths along the ultrasound beam. Thus, even after the measurement is froze the examiner can scroll back and view signals from any depth and replay the spectrum from any depth, even if it is different than the original set depth. This significantly reduces the risk of missing a valid blood flow signal and reaching an erroneous clinical diagnosis.

Sickle cell disease is a disorder of the blood caused by abnormal hemoglobin which causes distorted (sickled) red blood cells. It is associated with a high risk of stroke, particularly in the early years of childhood.

The IMUSA Dolphin is ideal for sickle cell disease diagnosis and monitoring, with a dedicated sickle cell protocol. Special markers, which can also be configured by the examiner, clearly mark the velocity thresholds according to international guidelines, help in the identification and documentation of the pathology. 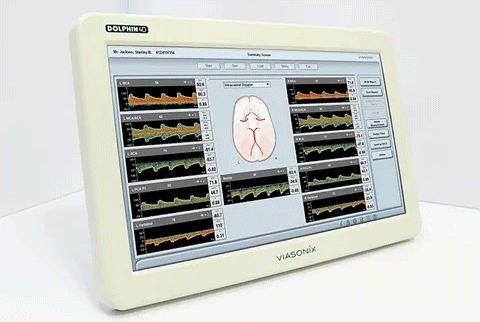 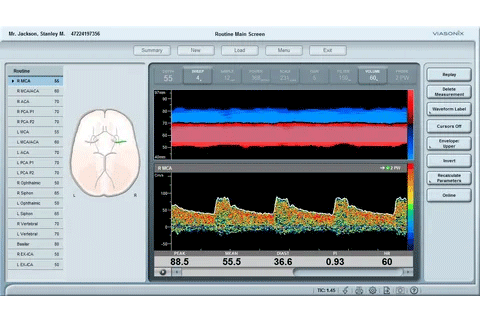 • Flexible design according to your needs!
• User friendly interface designed for touch screen
• All standard TCD features and much morel 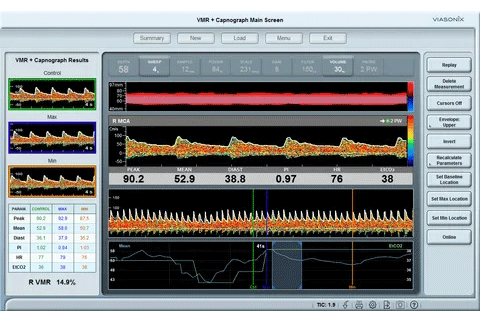 Request Literature Or A Demonstration